At the first locality along the geo-path on Skeinesset, at Våtvik, two different rocks are easily identified, one dark- and the other light-colored (see photo below). 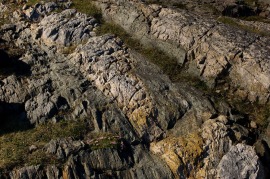 If you look more closely you will see that the dark rock has a green touch (see photo below) and you can see thin layers in the rock, which is called foliation. It has a preferred sheetlike orientation called schistocity and it is therefore called schist, which is a metamorphic rock. The green color in it suggests that it is a greenschist (greenstone) where the green mineral chlorite easily splits into flakes and makes the stone’s cleavability. Greenschist is transformed from dark volcanic rocks such as gabbro and basalt under moderate pressure and temperature increase. This greenschist is transformed from basalt. 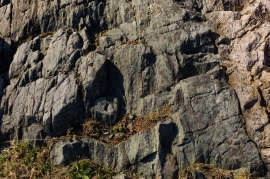 The light- coloured rock appears relatively massive, without special structures, except a rough and fractured surface. The rock is identified as a metamorphic rock called quartz-keratophyre, and is transformed from a volcanic rock called rhyolite, an extrusive rock with a mineral content identical with the more well-known granite.

The content of the mineral zircon makes the locality special. The mineral contains radioactive uranium which fissions to lead at a known rate. By measuring the ratio of uranium and lead, the rock-age is estimated to c. 497 million years. This dating indicates a probable age of what is called the Leka ophiolite, a typical section from oceanic crust to upper mantle.

Zircon may develop beautiful crystals and is a popular gemstones.