In the area where the photo is taken, you can find many different types of rocks, both in bedrock, and as fragments in cobble and boulders.

A glacier has a great ability to  transport even the coarsest grains. Both large and small grains became trapped and encapsulated into the Main Ice Sheet as it covered the Scandinavian peninsula, and were transported over long distances out to the edge of the glacier. Here at Leka we find grains that have been transported all the way from Sweden, from the ice center! Such stones and boulders are called erratics.

The local bedrock, and rock fragements in clasts as cobble and boulders, consists of many types of rocks. As you see they have  created a colorful community! These rocks are divided into three main types:

Massive, without structures , layering or schistosity. With or without visible «dots». Identical colour and luster of dots indicates the same mineral. Minerals are often called the brick of the rocks, and identical mineral-dots has identical chemical composition.

Rocks that are transformed by increased pressure- and/or temperature, normally below the earth’s crust, to new rocks. Formation of new minerals assembled into thin beds, called foliation, creates the striped appearance. If these layers contain mica they may split up into flakes as in schist. Highly metamorphosed rocks, as gneiss, are normally  resistant to weathering.

Petrified sand, pebble, and cobble hardened into a stone when grains were pressed against each other under the surface. If the grains were deposited in different layers these sedimentary structures will be preserved in the rock and may tell in what environment the rock  was formed.

1. How do you know that the erratics are not from the area around  this findspot ?

2. Try to find all three rock types in both bedrock and stones and boulders. Click here for more information about rocks. The pictures below are taken at the locality, of bedrock, stones, and boulders.

You find answer to the question here. 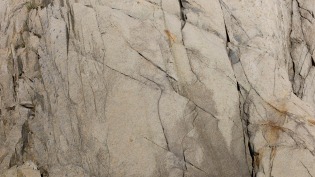 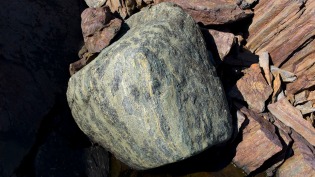 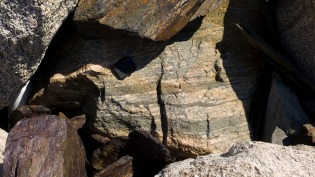 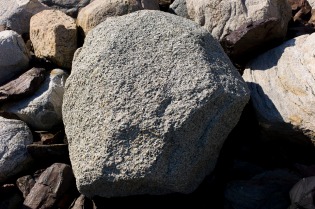