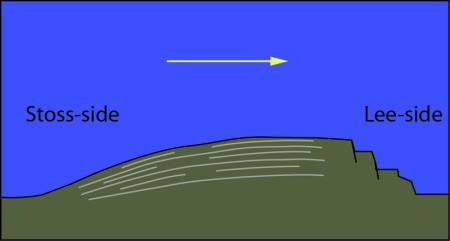 The vertical sketch above is a classical model of a small erosional landform called roche moutonnée. It is a ridge formed beneath a glacier in massive rocks, the basement beneath the glacier. The glacier has moved from left to right, and the so-called stoss side is  polished by the glacier, and sediments frozen to the bottom of the glacier, has acted as a huge sandpaper, where erosion has been enhanced by the huge pressure beneath the glacier. One can typically find lines on the surface of the stoss-side, so-called striae, formed by the erosion, parallel with the ice-movement-direction.

To create a roche moutonnée melt-water and refreezing plays an important role. Due to increased pressure in the stoss-side, ice close to melting-temperature has melted in the contact-zone between glacier and bedrock, and drained towards the lee-side and down into small fissures in the bedrock, where it has refreezed due to pressure- realise. Volume expansion when water freezes to ice has plucked slabs of rocks and created a steep-dipping lee-side.  The ridge is formed parallell with ice-movement direction.

Can you see one or more small landforms which resemble the sketch?

Identify both stoss- and leesides. In what direction is the landform pointing? Use either compass or try to find the direction by looking on the map below.

Do either of these measurements correspond with the directions of the fiords?

If so, what does it tell us?

If you down the Geocache-app on your smartphone you can search for nearby sites, and find a closer describtion in the site Ljønes. 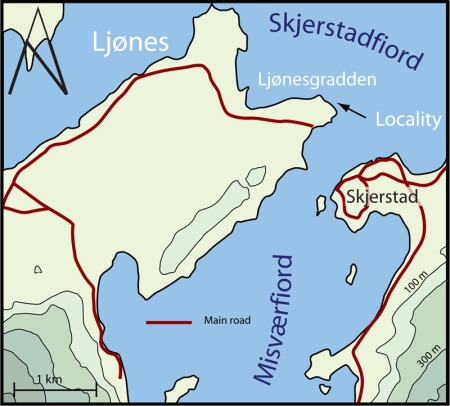