The stripes in the rocks is called striae (see photo below). These were formed beneath the Main Ice Sheet, that at its maximum covered most of Scandinavia. Rock particles frozen to the base of the glacier was scoured along the rock-surface, so that the glacier acted as a gigantic sand paper, where the pressure towards the underlying rock was extreme.  This is called ice-scouring. Striae are thus traces of glacier movement. Which way do you think the glacier has moved in this locality? 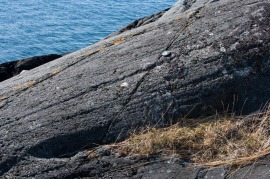 Here you are at a roche moutonée (see figure and photo below). It was formed under the ice sheet during last Ice Age, where multiple processes were involved in the formation.
When the  glacier pushed against an eminence of the rock below, ice melted to water since the melting point of ice decreases with increasing pressure. This melt water seeped to the leeward side of the eminence and down into fissures in the bedrock. The extreme pressure from the glacier declined in the lee-side and water froze to ice again and expanded. This caused frost weathering, creation of a steep lee-side, and formation of coarse grains as cobbles. The stoss-side was simultaneously  smoothed by ice-scouring into a streamlined landform; a roche moutonée, and rock-powder was formed.

The photo above is taken of the  roche moutonée at locality 3.

Answers to questions can be found here.